The history of the library 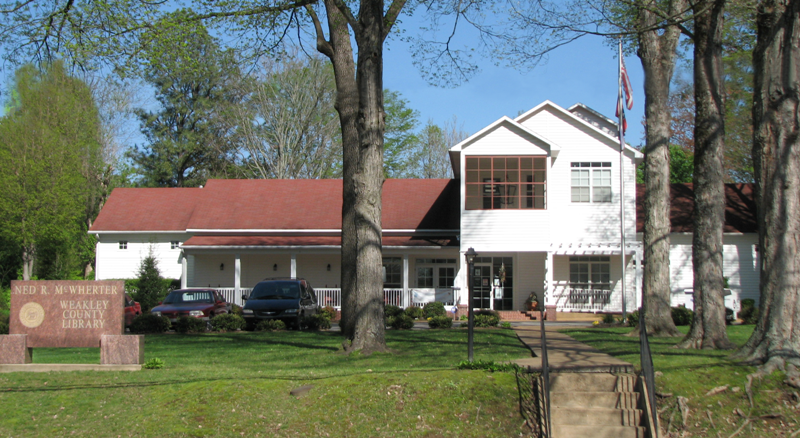 The Ned R. McWherter Weakley County Library opened in a rented room in the basement of Bowers Hotel on the main square in Dresden on April 9, 1946. Quarters were shared with the Red Cross. When the new courthouse was completed in 1950 both the library and the Red Cross were moved to a third floor room. Financial support was low-for many years $1,462 annually - and the location inaccessible. Circulation stayed around 3,000-4,000 annually for a number of years.

In June 1963, the Library was moved to a rented business building on the ground level. A larger county appropriation and the first city appropriation made this possible. In the new location circulation increased by 2,000 during the first year. The new quarters were attractive but small, and were outgrown almost immediately.

Weakley County was voted a two-year demonstration project by the Regional Board beginning July 1, 1964, which resulted in fast expansion and growth for all libraries of the county. Regional funds were used to pay librarians and buy books, and county funds were released to buy furniture and equipment and more books. The county board searched for a larger building, and finally a new building was constructed by a local citizen especially for renting to the Library. Library hours were increased from twenty per week to thirty-eight, including one evening, after the Library opened in the new building in February 1965.

The Library expanded to include a small concrete block building located behind the Library in 1993. This building was the Story Book House and was used for story times and summer reading programs.

Former Tennessee Governor Ned R. McWherter originated the idea for a new library facility to be located next door to his home on Linden Street in 1997. He provided funding for the purchase of the land and construction of the building. County commissioners helped obtain grants to help pay for the furnishings needed in the modern library. The Ned R. McWherter Weakley County Library was opened on December 1, 1997. On November 19, 1999 the Ned R. McWherter room was dedicated and the library held its Grand Opening.