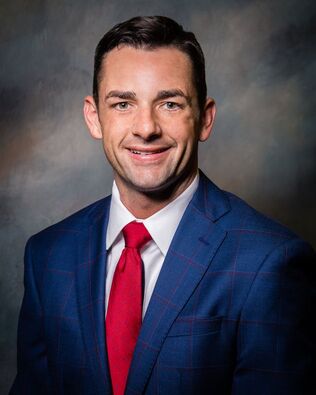 Jake Bynum, County Mayor
Jake Bynum was elected to the office of Weakley County Mayor on August 7, 2014 and took office for his first term on September 1, 2014. He was re-elected for a second term on August 2, 2018. Jake Bynum is a lifelong resident of Weakley County and attended school in Dresden. He graduated from the University of Tennessee at Martin with a Bachelor of Science in Business Administration. After college, Bynum worked in banking with First State Bank as a Business Development Specialist.

Jake was a founding member of the Weakley County Backpack Program in 2011, which has a mission to provide weekend meals to Weakley County children in food deprived homes.

Jake served on the board for Weakley County Reading Railroad, Weakley County Office on Aging, Second Harvest Food Bank – Western Branch, West Tennessee Hearing and Speech Center, and Dresden Elks Lodge. He has served as a volunteer Dresden firefighter and a member of the Dresden Rotary Club, where he formerly served as President, Treasurer and Assistant District Governor. He has served as a City of Dresden Alderman, Chairman of the Tennessee Iris Festival, Commissioner of the Dresden Cal Ripken Baseball League, C.O.M.M.U.N.I.T.Y. Mentor, President of the Dresden Business Association, Pi Kappa Alpha Alumni Board and the University of Tennessee Young Alumni Council. He is a graduate of Leadership Weakley County and WestStar, a West Tennessee Leadership program. He is a member and board member of the Weakley County Chamber of Commerce and served as President in 2012.

Currently, Jake serves as the Chairman of the Board of Commissioners as well as serving on the Weakley County Financial Management Committee. In addition, Jake is on the Board of Directors for Reelfoot Bank. He serves as a board member of the Volunteer Community Hospital, Weakley County Economic Development, Northwest Tennessee Development District, and the West Tennessee River Basin Authority.

Jake is married to Alyssa Bynum, and University of Tennessee at Martin graduate and Weakley County Schools System Elementary School Teacher. They have two children, Ella and Nash. He and his family attend First Baptist Church in Dresden, where he serves on the finance committee.

Erica is a 2011 graduate of the University of Tennessee at Martin with a Bachelor's Degree in Communications with emphasis in Public Relations. She is married to James H. Moore and the couple welcomed a baby girl in 2016, Hannah Jane. The Moore Family lives near downtown Martin.